There is allot of confusion about mounting PALS compatible pouches to Micro PALS belts and what is the best attachment system.  Below is what I believe is the best way to attach a pouch to this type of belt.

Before we start the following two links would help you get started with what the webbing and attachment systems are and do.

This is a Micro pals belt.  It happens to be an Eagle Branded belt 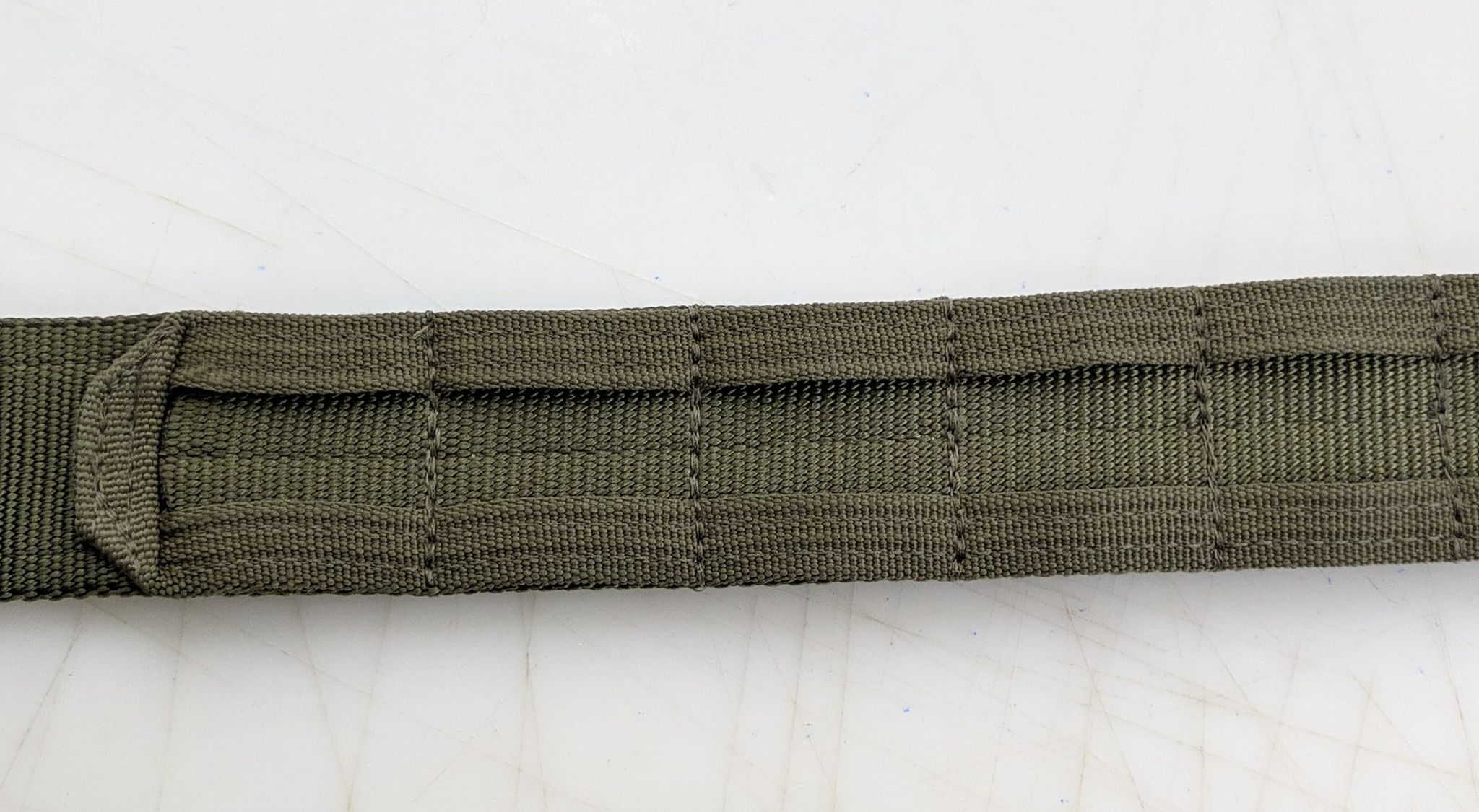 Micro PALS belts are a twist on the normal PALS system.  They use smaller than spec webbing, .5" usually instead of the 1" spec'ed.  They mostly have the 1.5" spacing from center of stitch to center of stitch.  And generally(this one fails) have a 1" spacing between the rows of webbing.  I believe Ronin Tactics?  Was the first to introduce the Micro belt Concept.

The intention of these belts is to direct attach your pouch to the belt with a PALS strap.  These can be direct sewn to the pouch like a Natick Snap or a separate strap like Malice clips or WTF straps that interfaces the pouch and belt.

This is a Double GAP pistol pouch attached via Tactical Tailors Malice Clips.  Note the GAP pouch spills into the next side channels slightly due to the gap of the pouch.  Due to the smaller than normal space as mentioned above on the belts horizontal webbing it is causing the pouch to deform slightly because of the 1" webbing on the pouch not lining up with the smaller .75" gap on the belt.  Note the pouch is centered across two "columns" of PALS webbing on the belt. 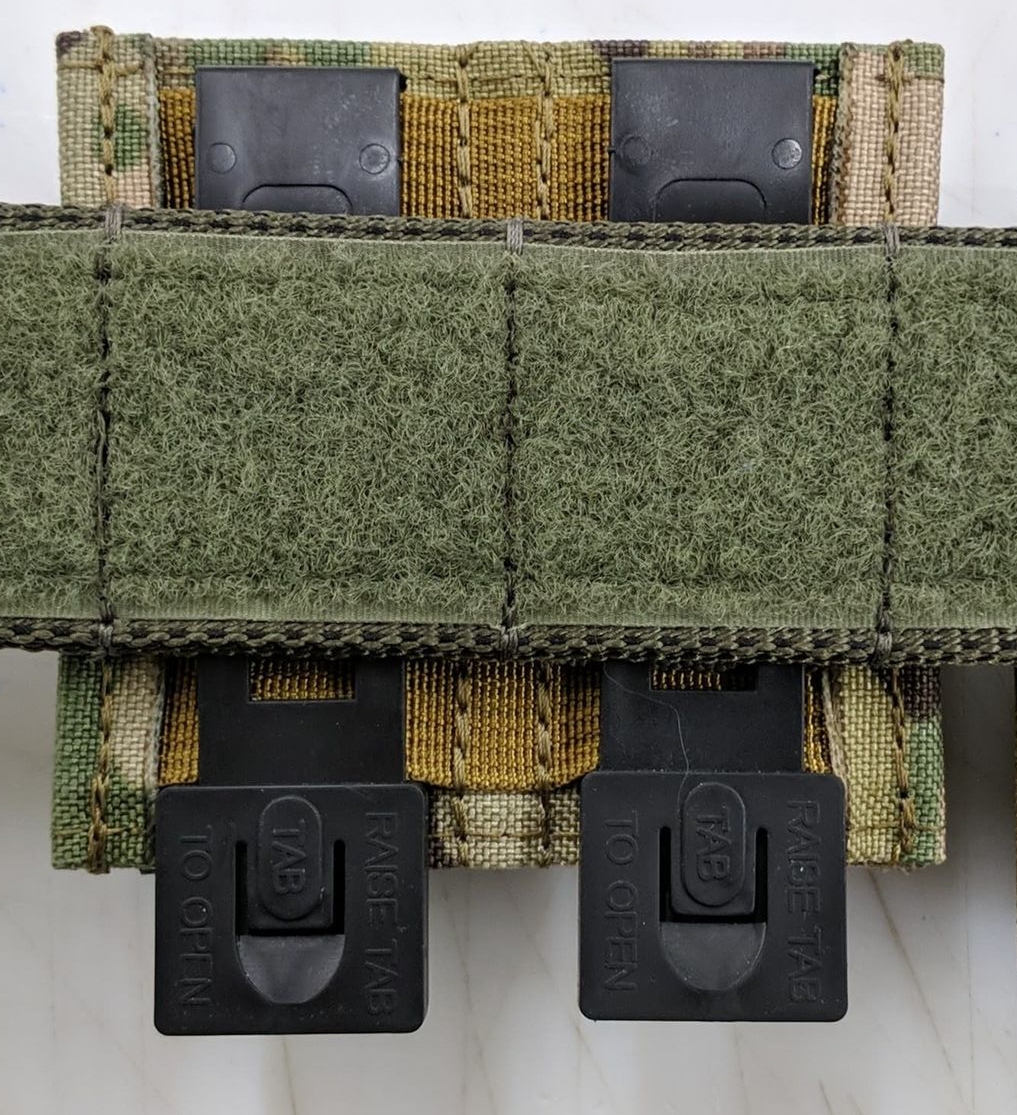 This is another Double GAP pistol pouch now attached with Wtfidea's WTF strap.  The pouch does not suffer from the belts smaller gap between the horizontal webbing due to the straps more fabric nature(Malice clip is stiff) but still poses an issue.  Like the pouch above this GAPed pouch spills into the next side channels, this may pose issues when mounting other pouches directly next to this pouch due to its "GAP".  Another thing to note is how the pouch in this and the previous picture sits on the belt.  It is centered top to bottom as the 3 rows of PALS webbing on the pouch are centered top to bottom.  For me this is not as ideal as it is sitting slightly high putting the mags even higher on the belt line. 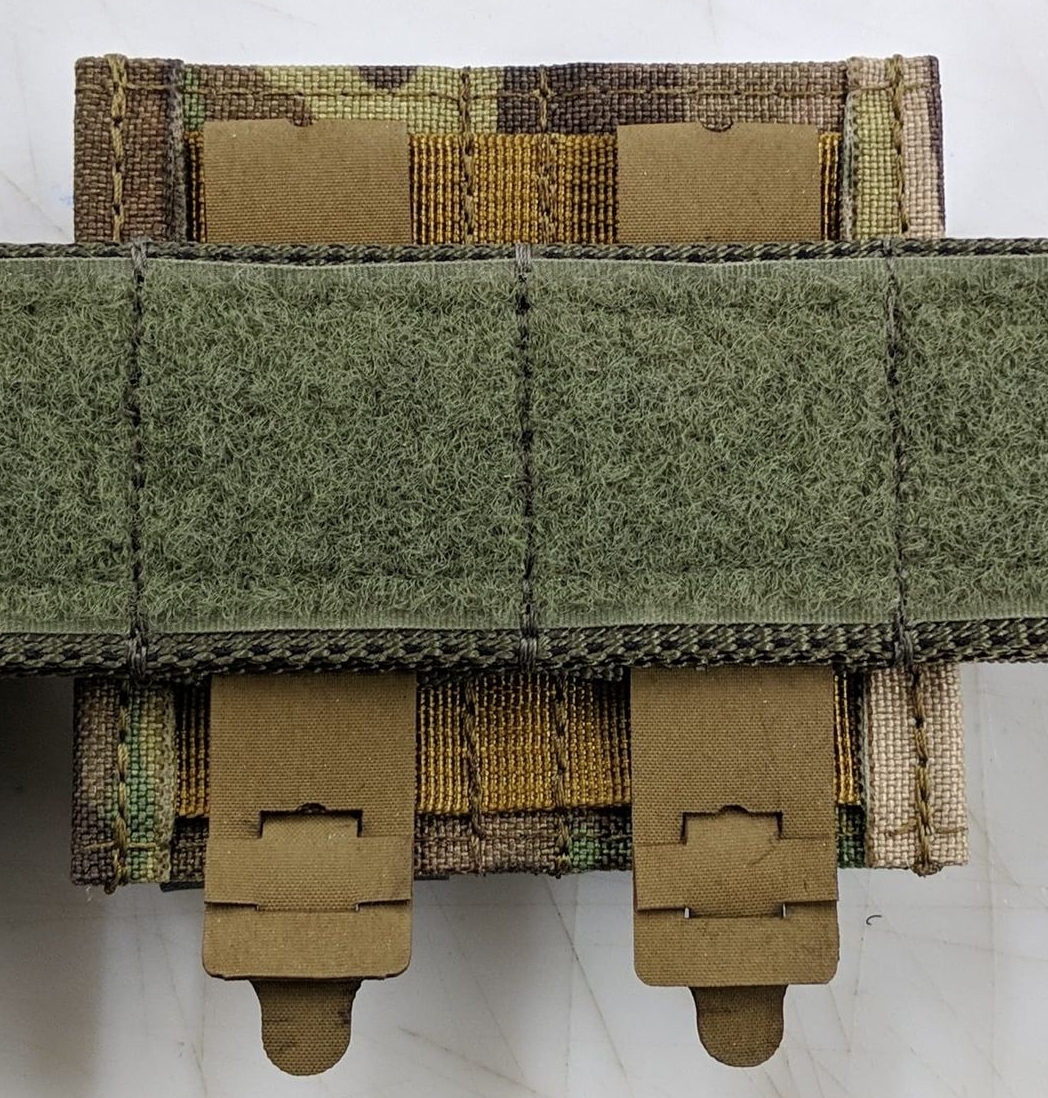 This is a Single Short 556 pouch mounted to the belt via Velcro one-wrap velcro.  The one-wrap does not interface with the PALS webbing on the belt but instead "clamps" around the belt.  Depending on your belt it may have hook or loop velcro on the inside and the one-wrap velcro can be reversed to engage your specific velcro locking the pouch in place.  This is our preferred attachment method for a micro PALS belt.  It wraps the belt instead of being an attachment between the pouch and belt and makes for a more secure and less floppy attachment.  Note this pouch is sitting much lower on the belt than the previous attachment system, this may be key for you for better clearing armor or having less outward lean of the mags themselves. 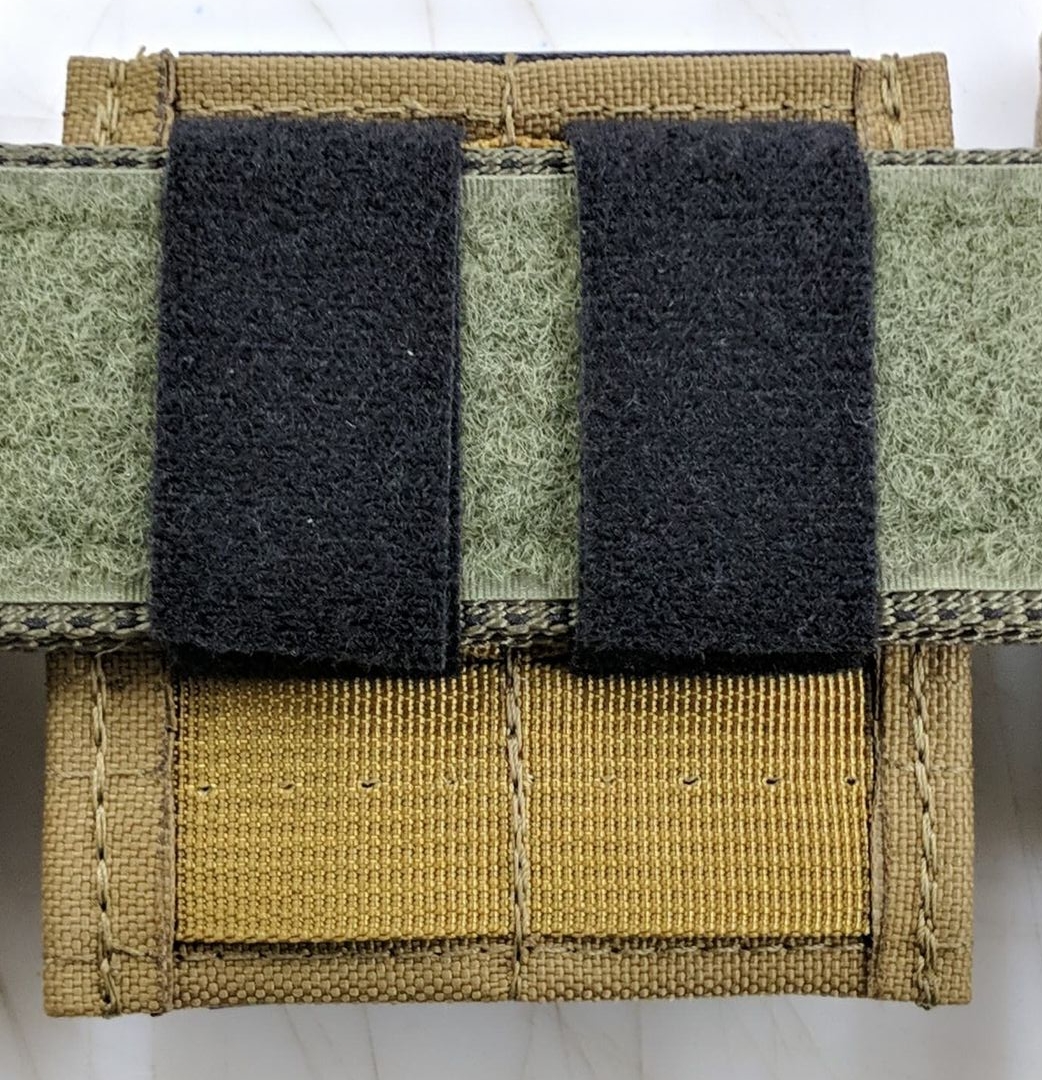 All three pouches mounted.  Again note the one-wraped pouch sits lower and is not tied to having to be mounted only every 1.5" via the PALS channels, essentially micro adjusting its location.

I hope this helps clarify some issues.  We receive quite a few emails daily about this subject.

Narrower than the speced 1" gap. 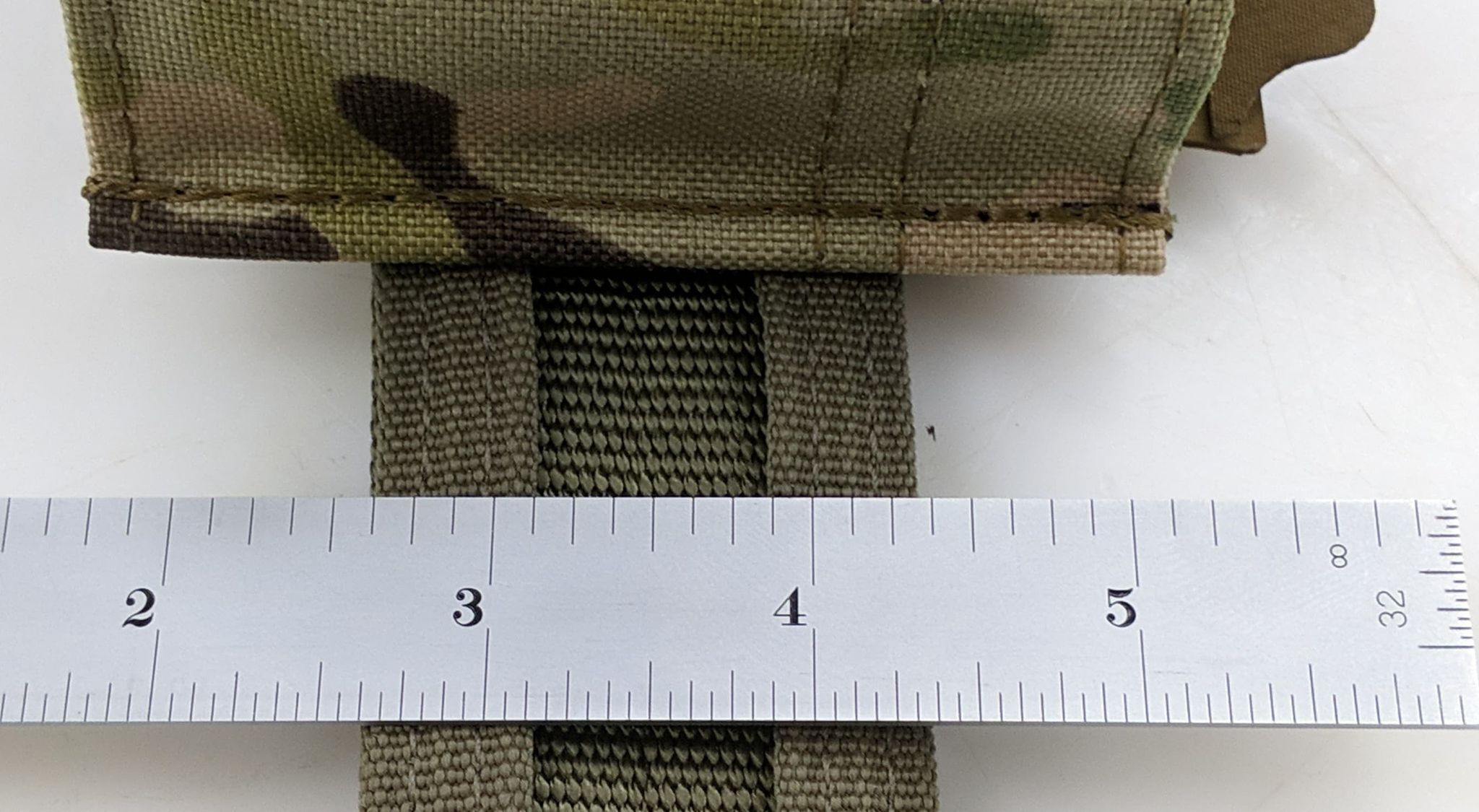 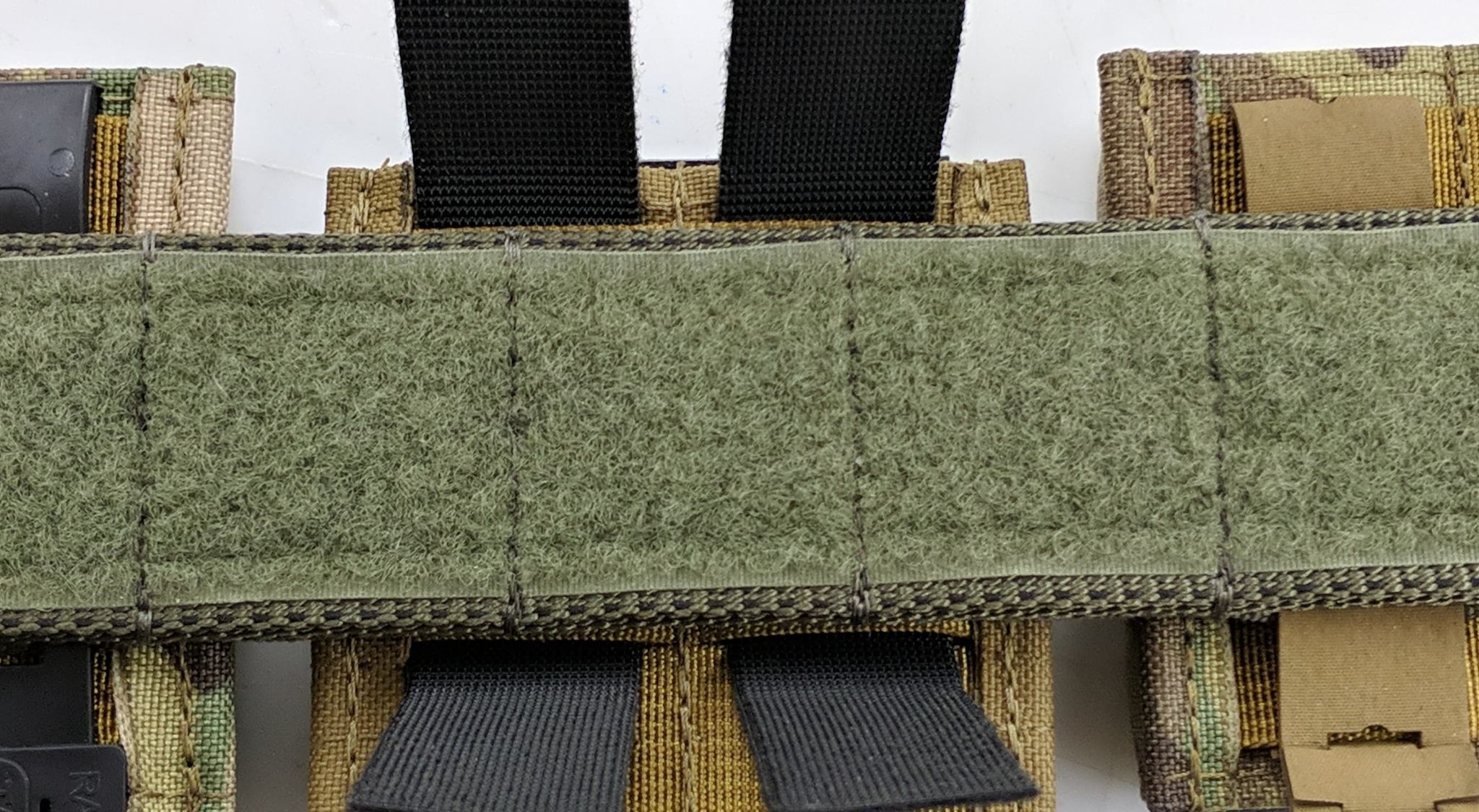